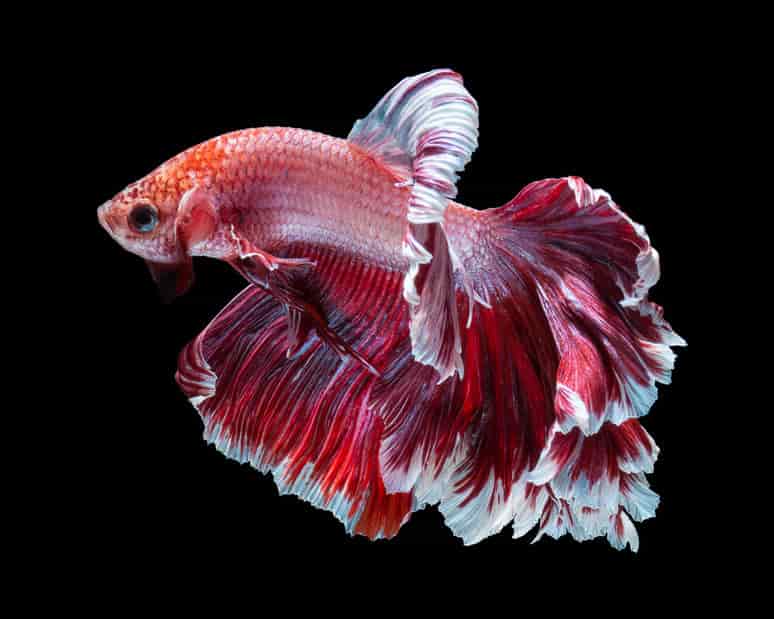 Easy is probably not an option with most of these aquarium fish.

Enter at your own risk.

Article Index – Clicking on the fish name will take you to that listing.

The king of all pancake shaped, aquarium fish. 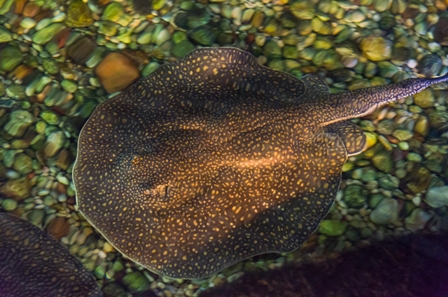 Ease of care: Freshwater Stingrays are challenging to keep. Rays require a super-sized tank, soft water, and have a dangerous stinger in the tail. They need sand at the bottom of the tank in which they will constantly dig. Stingrays are the ditch digger of your aquarium.

How big do freshwater stingrays get? 18-inch body and 12-inch tail (Two and a half feet long).

Recommended minimum tank size: 125 gallons per fish, but at least 200 plus would be better.

Do you need additional information on buying an aquarium including size, weight, location and more? Tap this link to go to an article I wrote about just these questions.

What do freshwater stingrays eat? Just about anything bearing in mind that they are carnivores. Maybe even including your hand?

Now you’re ready to show off. What aquarium hobbyist has a stingray in their freshwater tank? One answer to that question is “wealthy people,” as freshwater stingrays can run in the hundreds of dollars.

For example, a freshwater Polka Dot Stingray, Potamotrygon Leopoldi is a showstopper if you have the cash to spare and dig aquariums instead of Bentleys. A genetic defect gives the fish a U-shaped body rather than a round one and deforms the mouth, requiring daily hand feeding. Extra special care is a small price to pay to raise a fascinating shark relative. 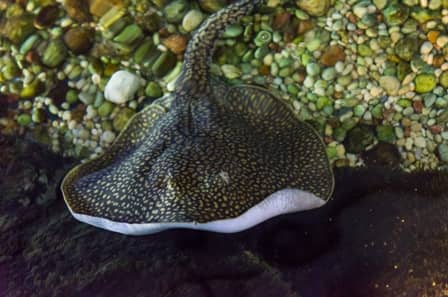 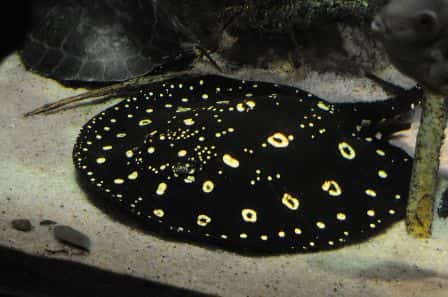 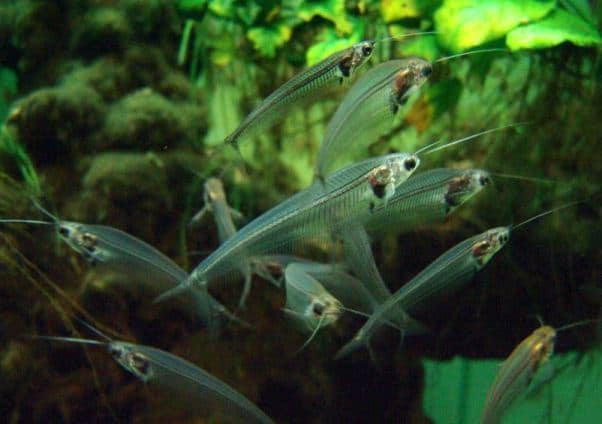 Ease of care: Glass Catfish are medium to difficult to care for. They can’t handle changes in water parameters which can make caring for them a little more challenging. Timid & shy and must be kept in groups of at least 6. The more, the better.

How big can glass catfish get? 6 inches.

Recommended minimum tank size: Six adult Glass Catfish will do best in an aquarium of at least 55 gallons. 125 Gallons would be even better.

What do glass catfish eat? Glass Catfish prefer live foods, but can be trained to eat frozen “live” foods.

Transparent in body and unusual in shape, these fish are sought after for tank enthusiasts who love to see the inner workings of their specimens. Buy with care — the nocturnal Glass Catfish needs a school of at least six and can’t survive fluctuating tank conditions. 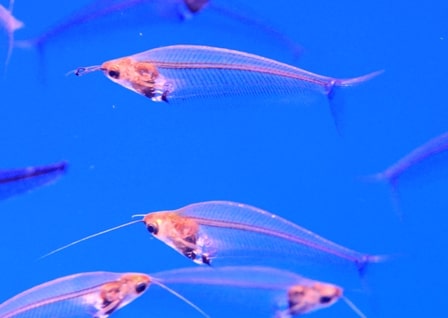 Side Note: Here is an article on another catfish Farowella catfish. Exotic and cool looking. Link opens in a new window. 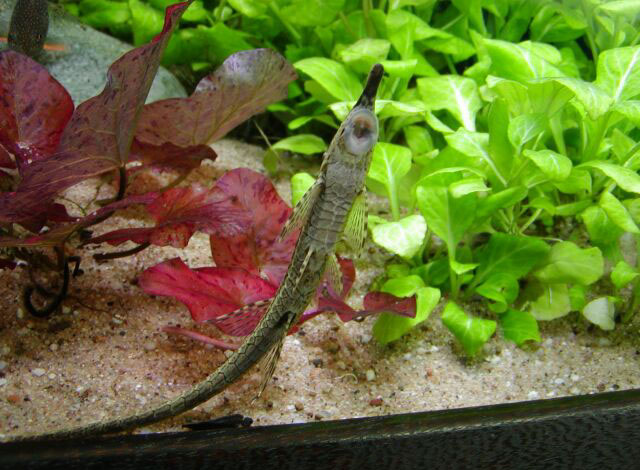 An aquarium fish only if you can afford the aquarium that would house this monster. 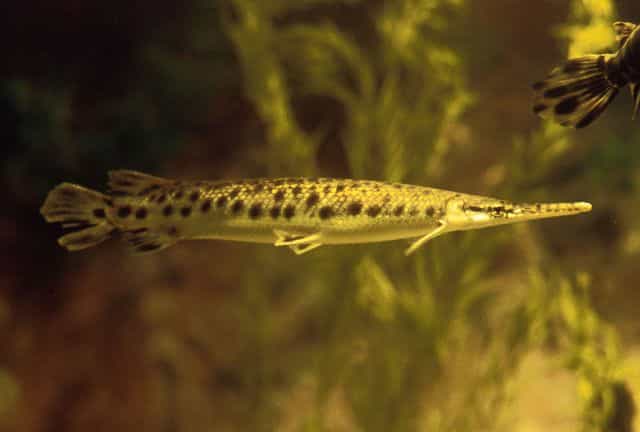 Ease of care: “Don’t try this at home!” might be an appropriate saying for a Golden Gar. Care is difficult to impossible due to how large of an aquarium is needed for this active fish.

Recommended minimum tank size: 400 gallons? There is little information on how to keep this fish in an aquarium.

How much do golden gars cost? I saw one listed for $3500. Be careful what you buy. I saw alligator gars for sale (cheap) as aquarium fish, but alligator gars can grow to 400 lbs.

Compatibility: Gars will happily eat any tank-mate that they can fit in their mouth.

What do Golden gars eat? Live foods but can be trained to eat frozen live foods.

Known to be “worth its weight in gold,” a Golden Gar can fetch prices over $4,000. If you can afford it, the sunburst coloration from gold on the back to yellow on the belly, paired with the distinctive bottlenose, will raise the eyebrows of fish enthusiasts and amateurs alike. The purchase price is where the expenses start with these fish. Gar fish have a monstrous appetite and need at least 400 gallons of filtered water to lord over. 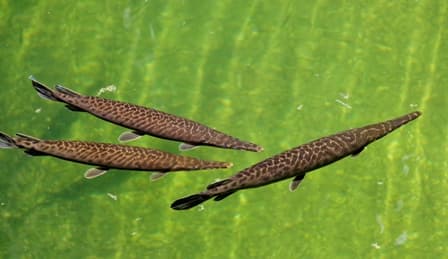 12 inches long? But they were so cute in the store… 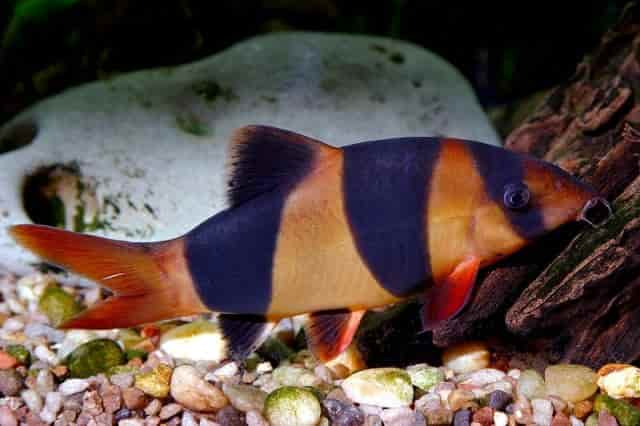 Ease of care: Medium due to how large they become.

How big do clown loaches get? Clown Loaches grow to twelve inches.

Recommended minimum tank size: Clown Loaches should have at least 55 gallons per loach.

How much do clown loaches cost? $5 and up depending on size.

What do clown loaches eat? Clown loaches are omnivores and need a varied diet. Feed Clown Loaches live foods, frozen “live” foods, and cooked veggies. Here is an interesting article on what to feed your fish. Opens in a new window.

Not rare, but quite colorful. Clown loaches are natives of the oxygen-rich waters of the Yangtze River. Excessive damming of its natural habitat is threating this loach with extinction in the wild. They need a lot of tank space. They do best in social groups of four or more. If you can swing it, their flattened heads, beady eyes, and gold background color with dark, irregular blotches make them stand out in a fish collection.

Big, gentle giant, unless you are a fish that can fit in its mouth. 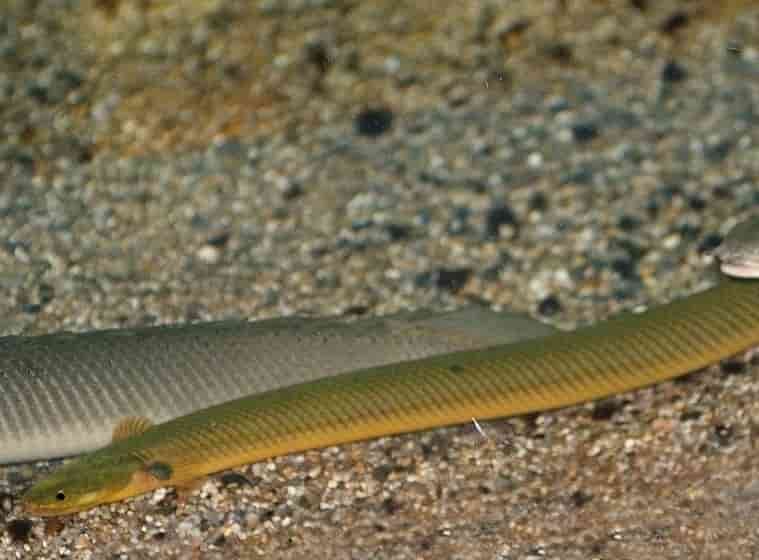 Ease of care: Medium due to how big they get

How big do ropefish get? 36″ in length – Buy an enormous aquarium because this fish get’s huge.

Compatibility: Timid fish. They need lots of good hiding places. May be bullied by other tank mates despite its size.

What do ropefish eat? Ropefish are carnivores. They can be fed live foods, feeder fish, live insects, frozen “live” foods, and chopped meats.

As you might expect from the name, the long, sea-green body of a Ropefish (aka Reedfish or Snakefish) resembles that of a slithery water snake. If you are pond-fishing in west or central Africa and catch one, don’t panic. They’re harmless to humans.

Ropefish have pulled off a fascinating adaptation to survive Africa’s harsh climate swings. They can temporarily breathe air. If a pond becomes uninhabitable (dries out) a Ropefish can slither out of it and survive a short, flopping overland trek to the next pond. Therefore, keep your ropefish in a tank with no gaps, in case it heads out for greener pastures, like your toilet.

So cute and so mean. Sheesh. 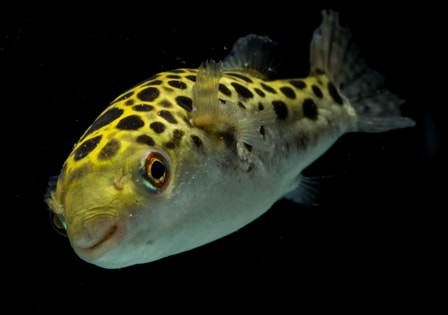 Click picture to see awesome full size photo.
Picture is copyrighted by the owner of this website.

Ease of care: Medium to difficult, mostly because of potential feeding challenges.

How big do dwarf pufferfish get? 1 inch

Recommended minimum tank size: Considering that they are messy eaters and like clean water, 20 gallons or more should be considered.

How much do dwarf pufferfish cost? $5 to $10. These fish can be bred in captivity, therefore keeping down the price.

Gold-colored with a light underbelly and sparse spotting, the freshwater Dwarf Puffer trucks around aquariums with an insolent smirk on its face, like it has a secret. Fish enthusiasts know what it’s hiding, of course — if threatened, it can puff up to several times its normal size, becoming an unmanageable meal for many predators. This impressive trick has definitely gone to the Dwarf Puffer’s head, to the peril of its tank mates. It will take rude bites out of fins or even swallow smaller fish whole. Be careful of who else you put in the tank with the Dwarf Puffer.

Disregarding the hydrodynamics of most fish, Puffers float around like an airship, bobbing and sinking around the tank by modulating how much gas it fills with.

Note that to remain in good health, the Puffer’s fast-growing teeth will need to be milled down to keep them from stabbing its own head. You can do this by giving it hard-shelled snails to feed on, or (for the adventurous) buying a file and doing it yourself by hand (kidding!). 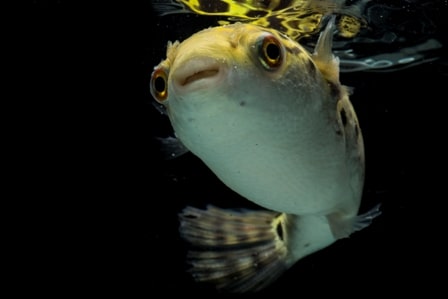 Similar Article  – What Are The 20 Most Awesome, Freshwater Fish For Beginners? 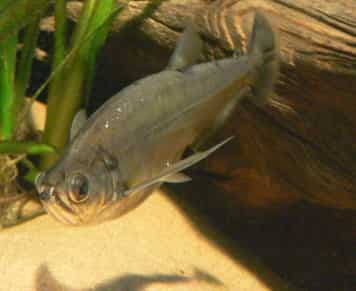 How big do vampire tetras get? Up to 11 inches.

How much do vampire tetras cost? $80 and up, each

Compatibility: Keep with other fish the same size or larger. Smaller fish will be eaten.

What do Vampire Tetras eat? If you want your vampire tetra to live longer than six months, a varied live diet is a must. Might take frozen live foods.

The Vampire Tetra adds a note of deep-sea terror to a freshwater fish collection, with its baleful gaze and a large intimidating mouthful of fangs. As you might guess, this fish does not play well with others. It eats live fish, rarely accepting frozen food. Only living a few years, it is best suited to its own tank and expert-level care.

Ease of care: Easy to medium

How big does the zebra plecostomus get? Up to 3 inches.

Compatibility: Compatible with any aquarium fish the same size or smaller.

What do zebra plecostomus eat? They appear to be omnivores, so a diet of live foods, algae wafers and veggies is appropriate.

Indigenous to the Xingu River of Brazil, the Zebra Plecostomus is a shy, fickle fish best suited for established tanks cared for by experienced aquarists.

When it makes an appearance, it makes an impression, sporting sharp black stripes against a dazzling white background.

Zebra Plecostomus fish are native to Brazil, where they are listed as endangered. They are endangered not only because of the aquarium trade, but because Brazil is building the Belo Monte Dam in their habitat making natural reproduction of this fish (nearly) impossible. It is expected that the zebra plecostomus will be extinct in the wild soon. Luckily, this fish can be bred in captivity. Prices are still quite high at around $250 per fish. 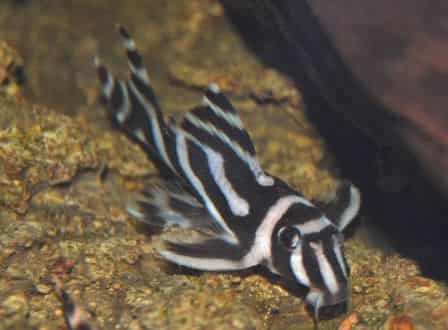 Zebra Plecostomus
By Birger A – Own work, CC BY-SA 3.0, Link

Have too many aquarium fish? Get one of these guys. That’ll take care of that problem. 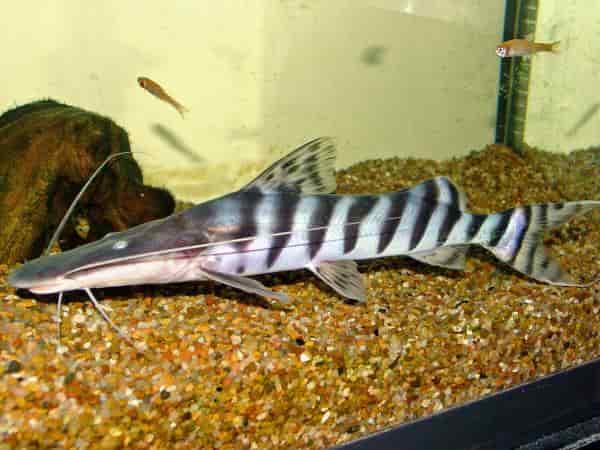 How big do zebra shovelnose catfish get? They can grow up to several feet.

How much do zebra shovelnose catfish cost? Info I found said $1200. I could not find one for sale online.

Compatibility: Catfish will eat any fish that will fit their enormous mouths. This fish will grow large enough for that to become a concern with all tank mates.

What do zebra shovelnose catfish eat? Everything but primarily carnivore based foods.

Expensive at north of $1,200, this catfish is a native of the Amazon River Basin and features spectacular diagonal white and black stripes. Growing up to several feet, it needs a lot of tank space. 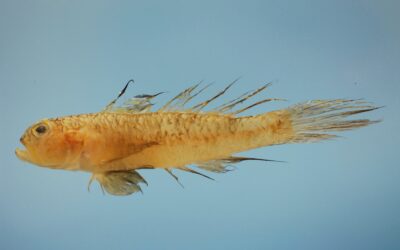 It can be suitable for a community tank. This fish presents peaceful behavior with other species, the males being quite territorial and aggressive towards each other. 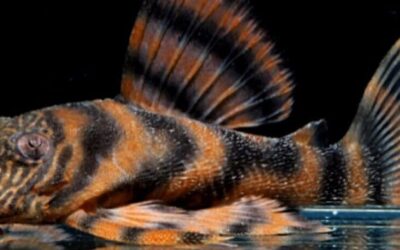 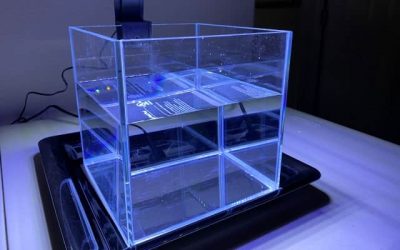